MTB Suspension Setup by Plus3 is the adjustment of your bike’s suspension so it performs to your ability, develops your confidence and makes progression on technical terrain easier, simple!

We come at MTB Coaching from a unique angle, we set your bike up AND coach your riding. If you’re not confident in your bike then you’re not going to be confident to progress your riding. Each component of your bike has an impact on your ride, if something doesn’t feel right then it normally needs some attention.

You might find it hard to pin down exactly what it is that affects your riding but we’re here to break it down with coaches who understand what it takes to make your bike perform perfectly for you. Have a read of our post, ‘What Plus 3 MTB Does Differently’ if you want to get a feel for our approach and why it works.

Our team of experienced coaches offer MTB suspension setup alongside skills coaching, no other MTB coaching company does this and our rider feedback is evidence of our success.

“Really amazing day super friendly coaches. My bike felt completely new after Will put his magic touch on it” | Matt B

In short we get in to things like this: 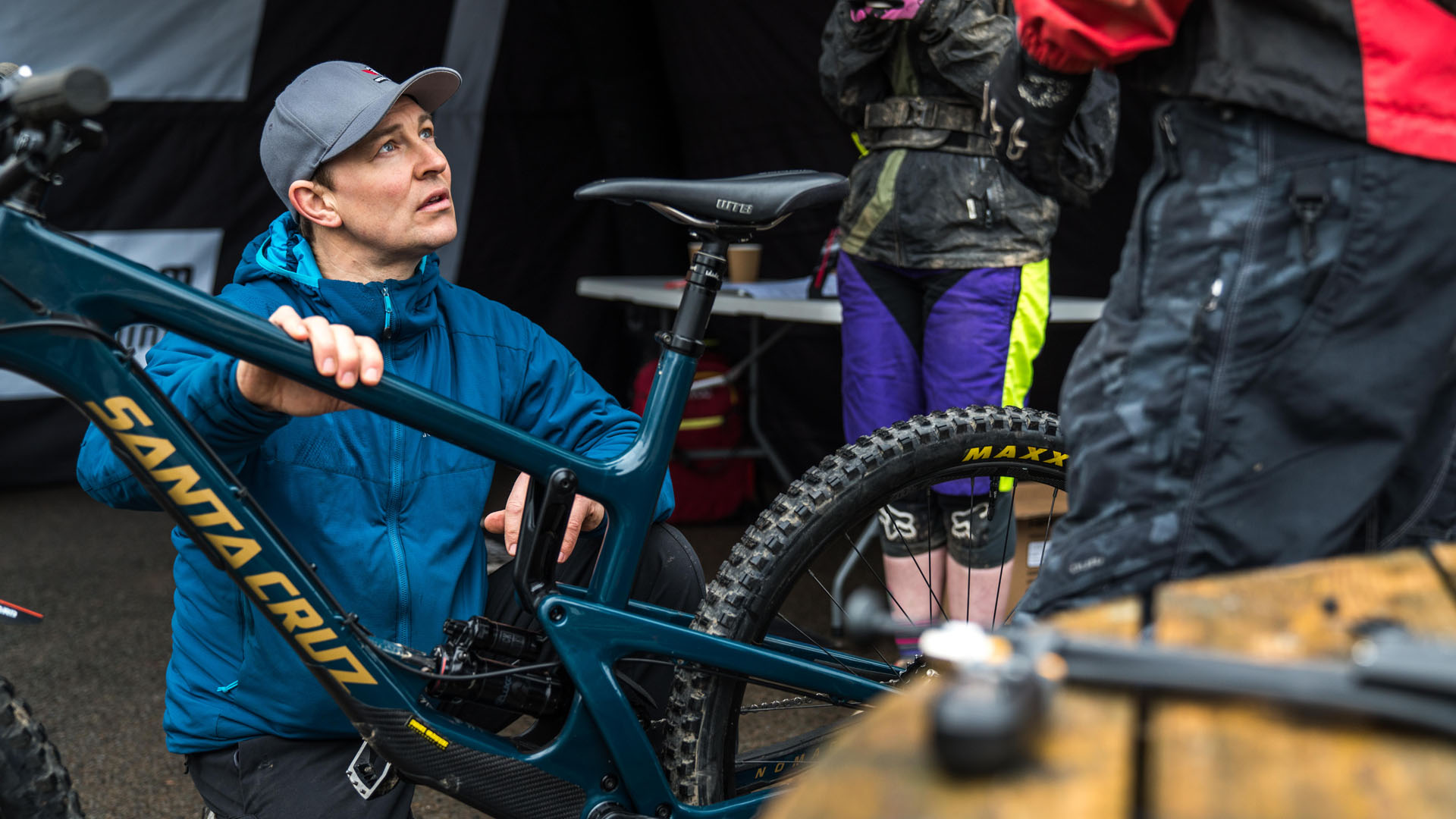 A detailed description of what we do with a rider is further down the page but in brief we’re basically looking at balance. Making sure the fork, shock and tyres behave according to the speed you ride and your body position when riding. We follow a process of setting the bike up for a rider and not for a trail, that way you can depend on your bike and learn how it behaves then adapt to the trail rather than fiddling with your setup and trying to learn what those changes have done as you’re riding.

This is something that’s filtered down from World Cup downhill racing, the principal that is…we’re not expecting Plus3 riders to be Rachel or Gee Atherton!

When riders are on the edge, pushing for every split second they need to know how their bike is going to behave. Although the speed of riders like you and I is a huge chunk slower the principal stays the same, we want to know what our bike is going to do in any given scenario.

MTB suspension setup is about balance and it’s individual to each rider, our process means you don’t need to worry about why something is happening, that’s our job! We watch you ride, identify issues then work as a team to fix them meaning when you jump back on your bike it inspires your progression.

So that’s (briefly) what we do when it comes to suspension setup, if you want to dive a bit deeper then keep scrolling for the details of what we did for one rider’s bike and riding. 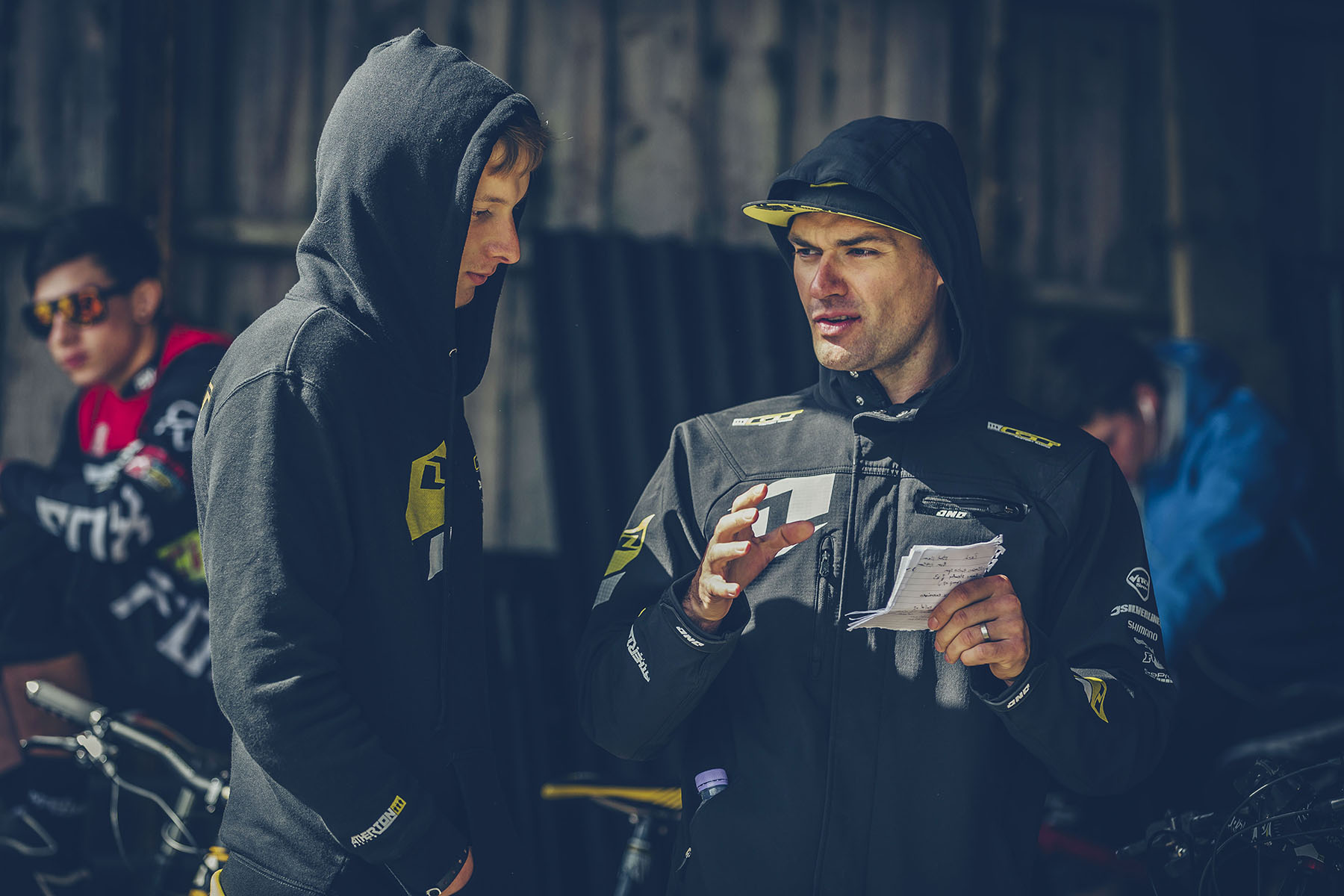 Following on from the info above here’s a settings sheet from a recent coaching day to give you an idea of what we might do: 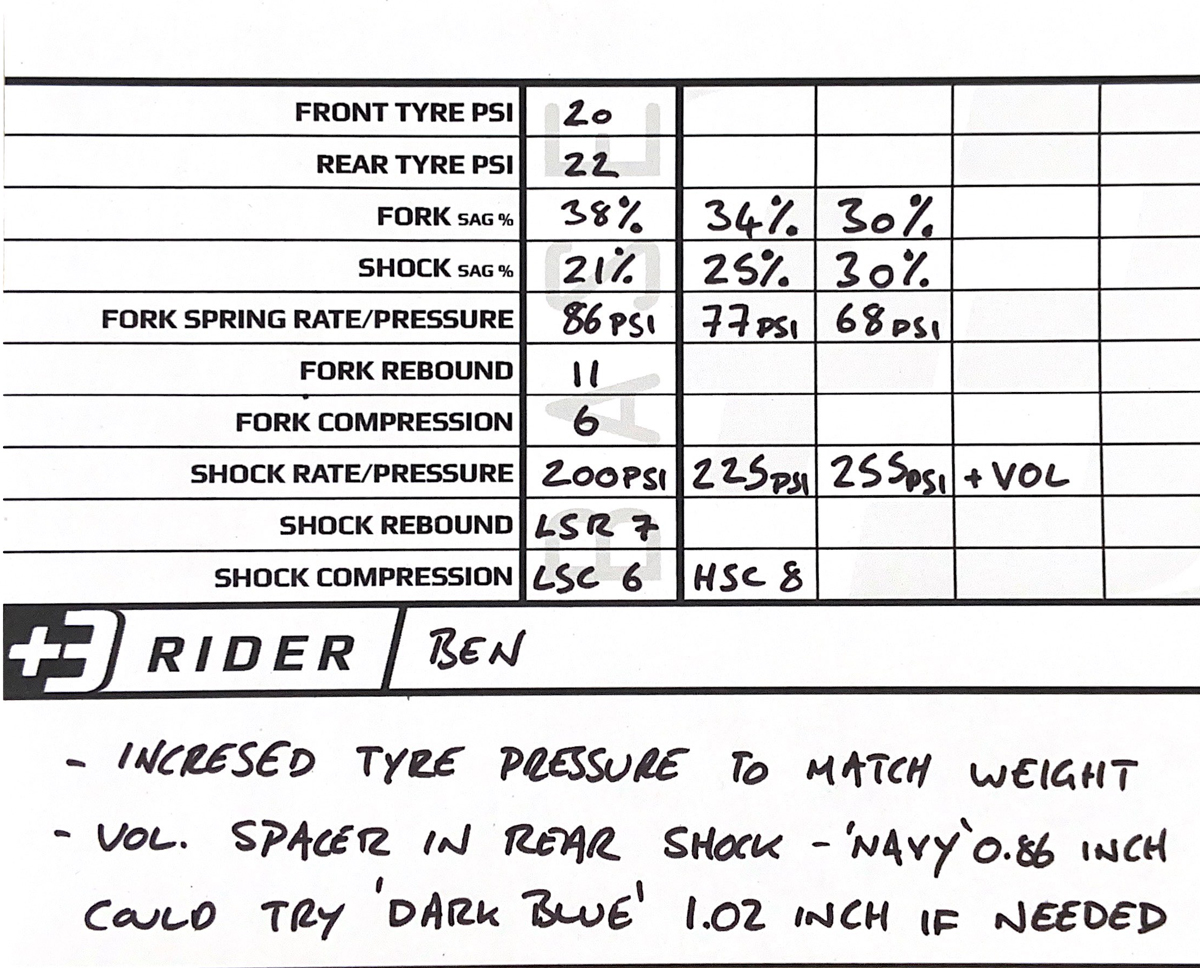 As you can see from the setup sheet we changed his setup gradually with no big leaps meaning Ben, our rider, got used to the feel of his bike and the benefits of an adjusted setup. The pressure in his shock and fork were adjusted to give a balanced sag position and adding the volume spacer to his rear shock made a big difference to the way his bike handled based on his body position, MTB suspension setup making a big difference!

Areas To Work On

Ben didn’t have the confidence to load his front wheel during cornering, he tended to sit back on the bike with his weight behind the bottom bracket. This caused a few different problems, his closed, slightly rearward posture was holding him back. Ideally his weight distribution would be even between his wheels with a more upright stance on the pedals, slightly bent arms and legs with eyes up looking ahead.

During our initial setup it was clear an imbalance between his fork and shock was partly the cause. 21% sag in his shock and 38% in his fork. This, combined with a bit of self protection from an old shoulder injury meant Ben’s posture on the bike wasn’t central.

We balanced his sag to 30% front and rear and added a large volume spacer to his DPX2 rear shock. Through Alan’s coaching we centralised his riding position, lifting his head and chest which in turn brought his hips forward and got his weight to the middle of the bike.

From these simple changes we made sure that Ben was comfortable on his new setup and then developed his speed and line choice into specific sections of trail that he regularly encountered when out riding. Linked turns, drops, rutted straights and rooted corners. With new found confidence in his bike and riding he’s in a position to develop his speed and skills confidently.

We’ll look into the refinements that adjusting high and low speed rebound or compression damping can achieve in another post but for now if you have any questions about our events or if you’d like to book a place then hit the link below.

That’s all for now!